where does it come from? 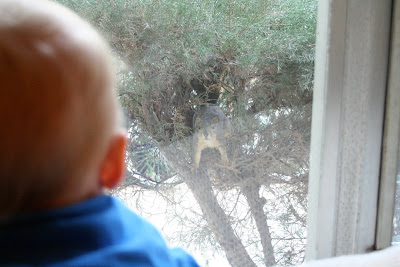 my little guy... how he amazes me everyday.

we sat there, looking out the window for squirrels for quite some time the other day.  he does his little sign for squirrel (tapping his fists together...and making a little "munching" sound)...and gets SO excited when one appears.  he makes sure that i'm looking, too, so we can enjoy it together.

a little while later, after the squirrel watching had ended, leo runs up to me, shouting...

leo: "mommy!  mommy!"
me: "yes?"
leo: "midey, midey!" (his word for mighty bites cereal), as he holds one out that he found, and then "foo!  foo!" (for food)
he then does his sign for squirrel again, and i realized he wanted to give the squirrel some food.

and my heart swelled.

my heart swelled because my mind immediately started to imagine the events that led to that little conversation.  how did it happen?  was he intentionally looking for food for the squirrel?  or did he find the mighty bite, and then decide he wanted to give it to the squirrel?  either way, his little mind, and his little heart, decided that that piece of food was specifically for the squirrel.  how sweet is that?

where does that come from?  it's not something that i can teach him, really.  it's something that just comes from within.  a pure, innocent, kindness... that he doesn't even know is kindness.  he just wanted to share...share something he really loves...and was so happy to do it.   just because.