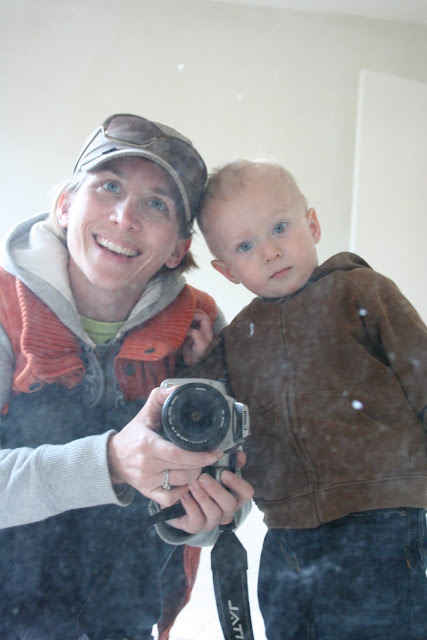 soon after that last post, my little leo awoke from his nap, obviously unaware of my grumpiness...and had no problems cheering me up.  all he needed to do was smile, and i was already on my way.  we had a few belly laughs after that, and that ugly feeling started to melt away.

what was interesting was what happened a little while later...

leo and i went for a little walk.  and he saw a dump truck he wanted to play with.  we live next door to a preschool, and that tempting little dump truck was in sight, but behind their gate.  he asked for it...several times...and i explained to him that he couldn't play with it, and why.  i reminded him of the couple of toys he had at home that i knew would peak his interest, and then, finally, the brown firetruck won him over.  so off we went...back home to get it.

and then we got inside.  and he saw the brown firetruck i was talking about.

and it wasn't what he had in mind.

the firetruck that he wanted was the one he saw at the toy store...days ago...in phoenix, arizona...where we were on a road trip...hundreds of miles away...

and the meltdown pursued.

he asked, and asked, and signed..."mommy, red wheeeeerrrr, peez!"  and, "mommy, lello wheeeeerrr, peez!" (he makes the siren sound for his firetruck word).  he was so sincere.

he just wanted.  he wanted. that. firetruck.

eventually, he calmed down.  (this was after the phone call to my husband to see if he would stop and get a firetruck on his way home from work).

and then leo went on to play with the toys he has.  including the brown firetruck.

brian never did get the new firetruck. although, i'm still tempted to get it.  but throughout the whole episode, all i could think about was how this little guy felt.  he just wanted.  and it rocked his world.

and just moments before, i felt the same way.  and if i could have, i probably would have cried and screamed like he did.

but then it passed.  just like it did for him.

we all have those moments.  but what's important, is that it does go away.  it very well might return...in fact, it most likely will return.  but then, we look around...see what we have...what we love...it's all around us...