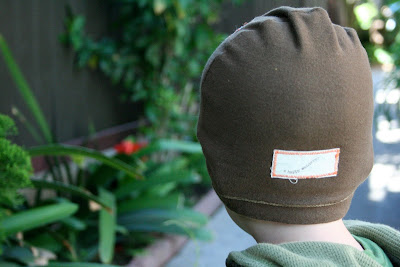 at some point after leo was born, i think for his first christmas...my sister made him an adorable hat.  she made it with all recycled fabrics, and it's the cutest hat in the world.  leo's been wearing it since it was way too big for him, and still wears it now.  i've got countless compliments on it...almost every time he wears it.

a couple weeks ago, i couldn't find it.  i got that hot, icky feeling inside when i realized it wasn't in the usual places.  (although, as my husband will attest, i have a habit of looking in the same places over and over again when i "lose" something, and then immediately surrendering to the worst possibilities...i threw it out...i left it on the roof of the car...it spontaneously combusted...).  regardless, i couldn't find it.  and i was BUMMED.  so i decided to make him a new one.

inspired by my sister's creation, i did the same thing and used all recycled fabrics.  i used the bottom of a t-shirt, so i wouldn't have to do the hem.  and then decided on a rocket design, since leo has been into rockets lately. 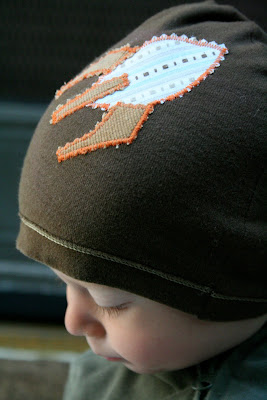 once i finished it, it felt gooood.  i love when that happens.  and leo was pretty excited to have a rocket hat, especially since it's brown.  so i kept going...

i've had some old sweaters that i felted a long time ago, just sitting in the closet, and figured they would be perfect!  so i got to cutting, and made three more!  i can't let go of the orange one, so that's a keeper for leo.  but the other two will be on my etsy shop as soon as i get around to taking pictures of them (also why there aren't pictures on here, either!). 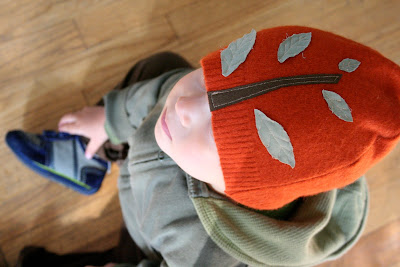 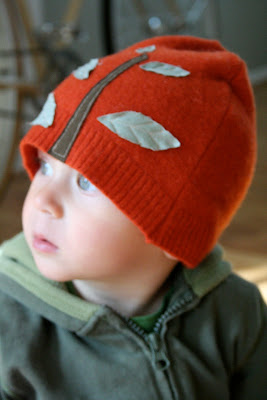 so, thank you, cheb, for the inspiration.  i love having a big sister like you :)

best part about it...in the middle of all the sewing, i decided to look in my diaper bag one last time...

and there it was.  the tree hat was found :) 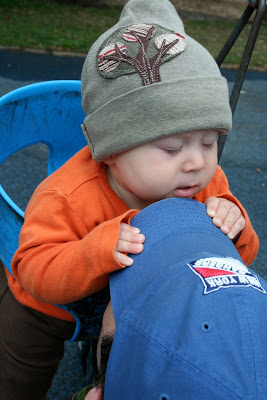