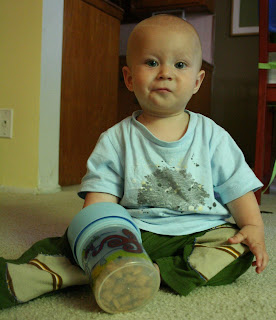 it’s got two overlapping stretchy pieces of fabric on the top that leo sticks his hand through to get his snack (i have to be honest…the first time that i showed him how to do it, he was a little nervous and didn’t want to put his hand in. but once i spread the top open and let him see those oh-so-scrumptious puffins…he was sold). it's not scratchy or pokey...just a nice soft layer. and since it overlaps, nothing comes out when it's upside down. nothing. and it comes with another lid (a hard one, with no opening) to use to keep the snack fresh.

the cup is a little bit bigger than most snack cups, so it doesn't quite fit in any cup holders, or the sides of a diaper bag. i usually just throw it in the main part of any bag i'm using instead. it does have a hole along the rim of the top, so it can be attached to the pacifier chain we use on our stroller. and, to make things even better it's bpa and phthalate free, and all parts are made in america.

it's a little pricier than most snack holders (i got ours on the soft landing site for $16). but, i'm hoping this will be the only snack cup we need.
at 10:48 PM