it seems like it's getting harder and harder for me to knowingly buy or use plastic. if someone gives me something that's plastic, fine...i won't necessarily turn my nose up at it. if it means re-using something instead of buying something new...that's also a decent reason to use plastic. or if it's just a good product overall (and free of toxins) that i know i'll use for a long time (like the previously mentioned, super-duper munchie mug)...then, yes, i'll do it. i think i'm pretty reasonable about it...but if i can avoid plastic, i do. 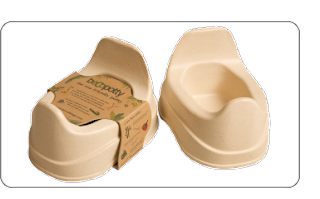 i'd like to introduce the little man to the potty. i know it's early...and i'm not forcing anything on him...but i'd just like for him to know it's there. in case he'd like to use it. but knowing i'd have to buy a hunk of a plastic potty...i just wasn't into it. so i searched for non-plastic potties, and i discovered the bECOpotty. it's pretty much your standard kiddie potty, but it's made of waste plant material (bamboo and rice husks), and packaged in recycled cardboard. for $12.99 (at trendykid.com), how could i pass it up? it just doesn't make sense to me to buy something plastic for the same or even more money rather than getting something nice and earth-friendly. even if it's the worst thing ever, i can bury it in our landlady's landscaping, and it will eventually biodegrade. that's right...a biodegrading potty.
at 10:43 PM