as if i didn't have a thousand things to do before we left for our trip, i wanted to make one last thing that was on my mind...
a little traveling letter mat!
with an old green t-shirt for the front, a gray one for the letters & pocket, and that same ol' curtain that's been creeping up for the backing of all of it, i came up with this... 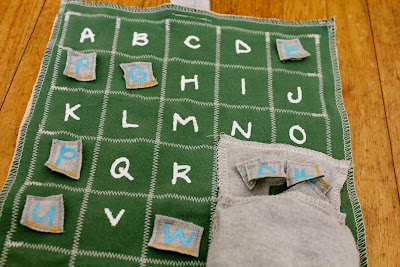 just a little matching activity... with a little pocket to store all the pieces.
i started by measuring out the fabric... each box is about 1 1/2" x 1 1/2 ".  i did a 5 x 6 square grid, so there would be an extra line of boxes along the bottom for some spelling. 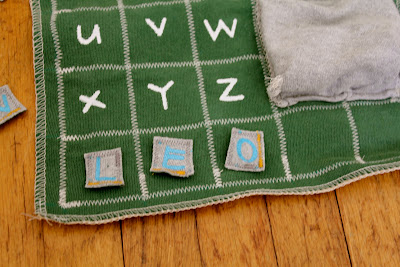 i also added a 1/2" border around the whole thing.  i drew some temporary lines for a guide, and zig zag stitched the boxes.  then i serged around the whole thing.
i've been meaning to sell my old sizzix die cutter for quite some time, but it came in pretty handy for this project.  i used it, along with a set of alphabet die cuts, to cut out letters on freezer paper, and print them onto the green fabric.  for the gray fabric letters, i ironed on some heat and bond lite to the back, ironed it onto the curtain fabric so they would be a little sturdier, did another round of letters with the freezer paper, and then zig zagged around each letter.  and then cut them out.  (for those without a die cutter, i'm thinking a fabric pen and some neat handwriting would be just as well to do all of the letters!  and probably a LOT easier, in fact!)
i did an extra line of yellow zig zag along the bottom of each letter, so leo would know which side was the bottom, especially for the letters that could go either way. 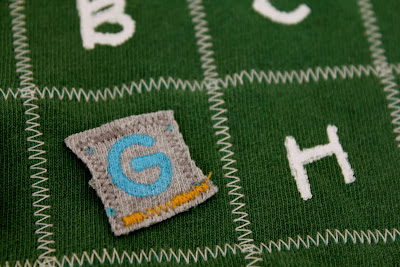 for the pocket... i sort of just cut out a long rectangle, with some extra fabric on the sides, folded it up and sewed it together, and then onto the grid.  if i had to do it again, i think i would've rearranged things so it took up the upper right four squares, because where it is now, when it's open, it blocks the "s" and "t".  live and learn :) 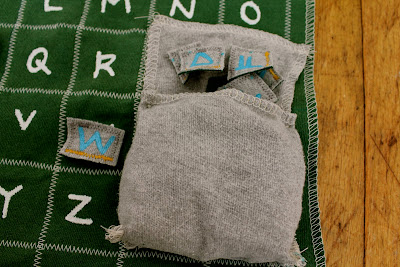 and then, to make it super portable, sewed on a little strap at the top and added some snaps so it could just roll right up. 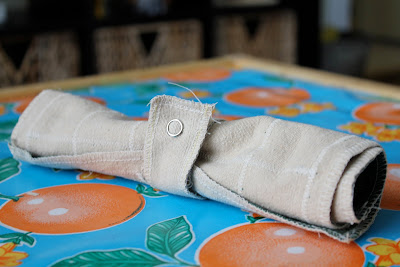 and there you have it... learning on the go! 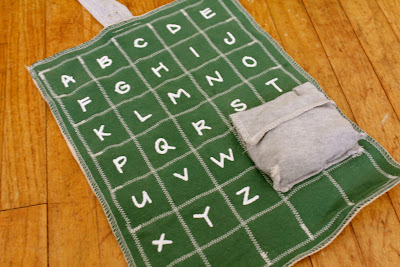 i linked up with creative me monday at the southern institute and sew much ado!